The merger of the Association of Collegiate Alumnae (ACA) with the Southern Association of College Women at the convention in St. Louis in 1921 created AAUW and its regions. Missouri became one of five state divisions in AAUW’s Southwest Central Region. Before the 1921 convention, ACA had encouraged formation of branches, and the six existing Missouri branches were represented at the convention: Kansas City and St. Louis, both organized in 1893; Columbia in 1907; Springfield in 1908; Maryville in 1918; and Warrensburg in 1920. Until sometime in the ‘90s, AAUW Missouri was called a Division, but it is now known as AAUW Missouri.

Throughout its history, the Division/AAUW Missouri has concentrated on issues related to the status of women and girls. It has lobbied for legislation and promoted education throughout the state at branch and state level. In the early days, international relationships were also a major concern, but after the national Association of AAUW severed its relationship with the International Federation of University Women (IFUW), these relationships ceased to be a major concern.

AAUW Missouri’s mission follows that of AAUW national. It advances gender equity for women and girls through education and advocacy. Its vision is equity for all, and its values are non-partisan, fact-based, integrity, inclusion, and intersectionality. To promote its mission, AAUW Missouri is using the following public policy priorities for 2020–2021:

In the 1930s the Division made a study of financial aid for college undergraduates and a broad study of education in the state. In 1969 the Division gave $1000 to the Coretta Scott King Fellowship endowment fund. In 1974–1975, the Board created a position for college/university relations in an effort to establish better communications with colleges and universities in Missouri. In 1992, AAUW Missouri held a roundtable on Educational Equity after the release of the AAUW report How Schools Shortchange Girls.

Since 1888, AAUW national has awarded fellowships and grants to deserving women to help with their education and to programs that promote AAUW’s mission. AAUW has been able to give $4–5 million annually to almost 300 recipients a year from an endowment valued at over $118,000,000. AAUW Missouri members, together with members across the country, financially supported fellowship and grant endowments through the AAUW Educational Foundation (EF) and the AAUW Legal Advocacy Fund (LAF) (founded in 1981). When additional funds were no longer needed, the EF and LAF entities no longer sought donations. Two or three national scholarships are given annually to women in Missouri. AAUW Missouri has funded fourteen endowments that award fellowships and grants annually, and several national AAUW endowments that provide scholarships for women are named for notable Missouri women: Blanche H. Dow, Mary Anne Parrish, Chloe E. Millikan, and Leona J. Beckmann. In 2015–2016 AAUW Missouri completed the endowment of the F. Elaine Richardson Missouri Endowment Fund.

In 1916 Division members joined with over 3000 suffragists and lined the streets of St. Louis during the Democratic National Convention. Called the Golden Lane, the women dressed in white, wore yellow sashes, and carried yellow umbrellas. They asked only for a plank in the party platform in support of women’s suffrage. The plank was included. In 1921 the Division was instrumental in the passage of a law that required preschools. In 1949 it conducted a study that resulted in improved legislation for mental hospitals. In 1951, at the state convention, it urged its branches to help end segregation in public schools, and throughout the 1950s encouraged branches to support mental health and school appropriations, revise child welfare laws, and establish a Missouri law requiring equal pay for equal work. In 1963, a bill, written by Dr. Sara Feder as AAUW state legislative chair, was passed by the Missouri legislature. It called for equal pay for female employees. In 1965–1967, the Division worked for and supported legislation for equal pay for equal work, the Economic Opportunity Act, and Head Start. In 1972–1973 it began concerted efforts to support the Equal Rights Amendment (ERA) and environmental issues and continued to work with the ERA Coalition. In the 1980s AAUW Missouri concentrated on these areas: community, cultural, education and international relations. It continued to attend legislative days when members talked to legislators and promoted issues affecting women, and it was interested in public education and the program “Women’s Work/Women’s Worth. In general, from the 1960s to the 1990s AAUW Missouri’s purpose was to enable members to act together with others to achieve the advancement of women, the promotion of lifelong learning, and the implementation of positive societal and community changes. By the end of the 20th century AAUW Missouri’s mission became to promote equity for all women and girls and to continue to promote lifelong education and positive societal change.  In the last two decades the main mission has remained the advancement of gender equity for women and girls through advocacy and education.

Over the years AAUW Missouri has received public policy grants from AAUW national to work on national public policy priorities, such as voter education. Protection of Title IX, gender pay equity, Get Out the Vote, and access to voting have also been of importance in recent years. As a member of the Missouri Women’s Network, AAUW Missouri has regularly attended legislative rallies at the state Capitol, and through its lobbyists has promoted issues that concern women’s rights. Members have also presented issue and candidate forums, and several have run for local state and political offices. In 2016, AAUW Missouri joined with other women’s organizations in a reenactment of the 1916 Golden Lane demonstration in St. Louis.

In 2020–2021, in pursuance of its mission to advocate for voting rights, an AAUW task force encouraged, educated, and inspired AAUW branches to focus on the centennial of the ratification and certification of the 19th Amendment that gave votes to women. Local mayors and councils issued proclamations and resolutions. Suffragist signs were, and continue to be, posted, and the task force prepared an archival summary that commemorates all branch activities, celebrations, and successes. It also provided a master resource document for future use. The document lists all resources and links to programs, articles, and videos that commemorate the ratification.

To further promote its mission, the AAUW Missouri Board’s new Diversity, Equity, and Integrity committee (DEI) meets monthly via ZOOM, as do the Public Policy, College/University, DEI and STEM committees. A Branch presidents’ group meets with the state president in monthly meetings, again via Zoom.

AAUW archives are now being stored at The State Historical Society on the University of Missouri campus, Columbia, MO. Click here for a copy of the above information. 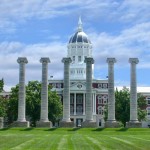